TYRONE ANTHONY is a renowned North American band which features TYRONE ANTHONY on bass and vocals, as well as, top LA. musicians. 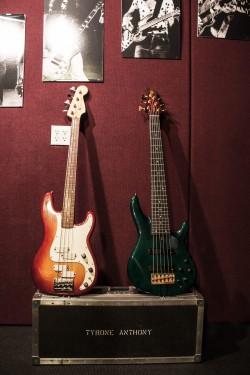 The group has been featured at numerous jazz festivals and top clubs throughout the U.S. and Canada.

TYRONE has appeared on stage with: Chick Corea, Yellowjackets, Sergio Mendes, Tom Scott, the late Dizzy Gillespie, Hiroshima, Fatburger and many others.

TYRONE ANTHONY has won the the W.A.V.E. award for his TV show C.P.A.T. Music Spotlight.

His current projects include: composing music for television commercials, movie soundtracks and producing music for a variety of artists.

Future projects include: a CD release called, JAZZ FESTIVALS throughout the country and an overseas tour.

The versatile musical talents of TYRONE ANTHONY has a wide audience appeal to all age groups.

So, come join us and enjoy a Musical Journey with the TYRONE ANTHONY GROUP.